My service dog roused me awake in the early darkness of Christmas morning, just as he’d done countless times before. But on Dec. 25, 2020, I was in the midst of a massive heart attack.

It was the last time Dozer would save my life. He died 40 days later from heart failure, the very thing he’d rescued me from. It was a brutal irony. I often told people how Dozer took all the bad away from me and left the good. Now I was alive and he was dead – a gift and a sacrifice, somehow.

Dozer’s actions that morning were miraculous. But he was just doing what he always did. He’d been saving me almost since the first day we met seven years earlier.

Dozer was an assistive device but he was also an appendage. He knew before I did – before anyone did – the subtle symptoms of my post-traumatic stress disorder that had been triggered by a head injury at the end of my 21-year Navy career. An elevated heart. A sweaty hand. The subconscious tap-tapping of a foot. He sensed it, and with his presence, with the nudge of his body or the placement of a paw, he did what no medication could.

Dozer knew me. And I knew him. I knew the sheen of his coat and the sound of his step and the dark brown of his eyes better than I knew anyone or anything.

Then he was gone, and there was no roadmap for life without him.

I didn’t think I needed a service dog. After leaving the Navy, I began a downward slide that was faster and steeper than I would have admitted to. Then during a veterans’ function, my wife, Danique, and I ended up at a table next to a woman who was talking about getting a service dog. I turned around and asked her where she planned to get it. She told me, and I thanked her, and that might have been the end of it. 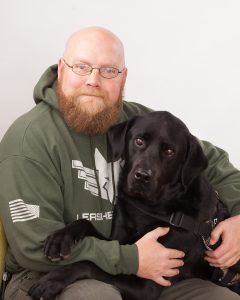 On Christmas morning 2020, my service dog woke me from a massive heart attack. It was the last time he would save my life.

“You should go get a service dog,” Danique said to me. I told her I probably didn’t need one.

“Oh,” she responded. “You thought it was an option?”

Dozer, a Mastador, was almost two years old when I met him in 2013. He was a big dog – Dozer was short for Bulldozer, in fact – and he reminded me of a gangly kid, all arms and legs and eager eyes. He’d been rescued by the service dog organization after he was discovered tied to a tree in the woods with a chain that looked big enough to hold back a tiger.

We met at the door of his kennel, and we walked out to a grassy field together. He just kept looking up at me, and I looked down at him, and then I dropped to my knees and kissed the side of his face and he licked me in return.

I finally stood, my hand on his leash. Dozer made a beeline for the woods behind us, pulling me off my feet and knocking me down. He’d seen a cat.

Dozer never would care for cats.

Two months after bringing Dozer home, Danique and I drove to a large indoor-outdoor market in Syracuse, New York. It was a cold, gray winter day, and a light snow fell. The three of us walked into the crowds together, and I felt confident with Dozer by my side.

As Danique shopped, Dozer’s whole demeanor changed. As I corrected him – overcorrected him – Danique asked me what I was doing. I told her that Dozer just wasn’t behaving. 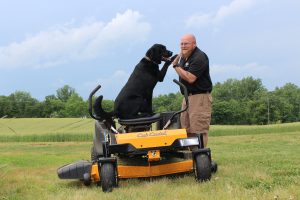 Dozer was with me every moment of every day. There were no days off.

It all came together then. A panic attack was coming on. I hadn’t known it. But Dozer did. He and I went off by ourselves and I just held onto him. A few minutes later, I was calm enough to rejoin Danique in the crowd – a feat that would have been impossible without him.

A week later, I rose early and was sitting around the house as Danique readied for classes at the university she attended. She asked me what I had planned for the day. I told her I was going to see a movie – a favorite hobby I had given up due to the stress and anxiety of it.

I decided Dozer and I would start with a matinee. Smaller crowds. But getting to the movie theater would require walking through a mall first, another challenge in and of itself at the time. Outside the car, I slipped Dozer’s service dog vest over his head and headed toward the entrance. I grabbed the door handle.

I couldn’t do it.

The next day, I stopped again. Finally, on the third day, we made it all the way through the mall and into the dark theater. It was like watching the film through tunnel vision. But we did it, Dozer’s head on my lap and my hand on his head until the final credits rolled.

That day, Dozer became my movie buddy. We would go to more than 500 movies altogether – so many that the word “movie” would make Dozer wiggle all over in excitement. Mostly he slept. And snored. But he was there. And because he was there, I could be, too.

No human has the intuition of a dog. Not because they don’t try or they aren’t somehow enough. And that was a fear when I sought out a service dog – that the people closest to me would think they hadn’t been or done enough.

A dog knows every aspect of you. They can smell and taste and sense physiological changes undetectable to a human eye. Service dogs can be trained to know if your blood sugar has surged too high or dropped too low before it turns into a medical emergency. They can be trained to respond to fatigue and loss of consciousness and seizures, to calm you and console you when you are stressed or anxious or on the verge of a panic attack. 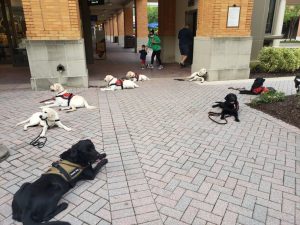 We called Dozer our nursery dog. He was like a kindergarten teacher who could gently correct the other dogs in our program without breaking their spirit.

But more than that, service dogs are steady and steadfast and unflinchingly loyal even on your worst days. They can’t cure. They don’t magically make everything better. But they are always there for you. They never quit on you. They never judge you. They are not burdened by your sorrow. When you look at them looking back at you, when you feel their uncomplicated love, it is difficult – if not impossible – to justify harming yourself.

That’s what I got from Dozer every day I was with him.

Dozer and I were not perfect. As a high-energy dog, he required more training than he’d had in the beginning. I did most of that. But I wouldn’t have traded Dozer for any other dog in the world. He grew into a solid, stable, confident dog.

The experience made me a better person. It also set me on a path I couldn’t have imagined before we met. I began interning for the service organization that provided Dozer to me. I was hired and worked my way up to head warrior trainer. Dozer and I were a team, helping certify and recertify more than 200 veterans and their service dogs together. After three years, Danique – a Navy veteran and service dog industry expert – and I decided to start our own service dog organization with our good friend Jason Haag, a retired Marine captain and wounded combat veteran with a service dog named Axel.

We called our limited liability corporation Dozer and Axel, and in 2017, the three of us founded the nonprofit Leashes of Valor to provide highly trained service dogs at no cost to wounded and disabled post-9/11 veterans. We called Dozer our nursery dog; he was like a kindergarten teacher who could gently correct the other dogs in our program without breaking their spirit. And with Dozer by my side, I wasn’t just telling the veterans in our program how to be service dog handlers. I was showing them.

Dozer was with me every moment of every day. He accompanied me in cars and on trains, in stores and restaurants and movie theaters. He went to the bathroom with me. He was next to me when I slept. There were no breaks, no days off. There weren’t supposed to be. This is what I worked hard to explain to our applicants. How the time a person spends with their service dog pales in comparison to all other relationships. How it is a life-altering event. And ultimately, how much better life can be because of it.

I thought I had more time. Certainly, I did not know that February day one year ago would be our last. It was normal in almost every way: Dozer walked over to the bed and licked me in the face by way of his morning greeting. I got up and fed him and our pet corgis and he played with the other dogs like he always did.

Then at breakfast at a restaurant, Dozer threw up under the table. It was the first accident he’d had in public in all our years together. Outside, he seemed a little off, so I decided to head home. A mile before the turn to our veterinarian’s office, Dozer stood up in the backseat and collapsed. 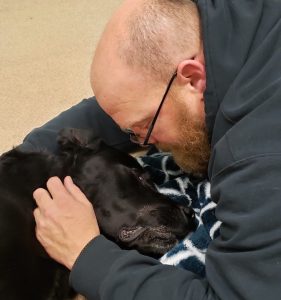 I held Dozer while they administered the drugs that would stop his failing heart. He was a good boy right up to the end.

The veterinary staff was already waiting when I arrived, and I scooped up Dozer and carried him inside and watched as they carried him back. An eternity passed. Finally, the senior doctor came in. They’d tested and retested. Dozer had heart failure, and nothing could be done for him.

I had considered the end before. But I thought I had more time.

Dozer and I laid together, head to head, for nearly an hour. I held him while they administered the drugs that would stop his failing heart. And he was such a good boy. All the way to the end.

I knew I had to keep moving. I had to stay upbeat and positive. Otherwise I risked falling into the very place Dozer delivered me from. So I waded through the thick fog of grief and did all the things I once did with Dozer.

I welcomed a new class of veterans and introduced them to their service dogs. I guided them through the lessons I had learned and tried to help them grasp how these dogs could change their lives the way Dozer had changed mine.

I went to the movies. It was painful to do alone what Dozer and I had done as a team for so long. But I did it.

Dozer gave this to me.