When one leash saves two lives, adoption fees are a small price to pay

Month after month, adopters in search of a four-legged family member passed by Tango’s kennel at the SPCA of Fredericksburg. Maybe it was the dog’s size. Or maybe it was because this handsome, hazel-eyed Vizsla resembled one of more than a dozen so-called “bully breeds” so often avoided.

As the leader of a nonprofit that provides service dogs at no cost to wounded and disabled veterans, I often get the chance to meet animals like Tango in need of homes. We pride ourselves on sourcing canines from shelters and rescue organizations whenever possible. One leash saves two lives, as we so often say: that of the animal and the veteran whose life they help transform.

Lucky for us, our canine team recognized Tango’s potential. We worked with him for more than a year before he was paired with Justin, a Montana farmer and Marine Corps veteran who suffered from post-traumatic stress disorder brought on by combat tours in Iraq and Afghanistan.

Three years after meeting Tango on our farm in Central Virginia, Justin has rebuilt relationships with family and returned to the activities most of us take for granted. “The amount of healing that has occurred has been absolutely amazing,” Justin says. “Tango is with me everywhere I go. I definitely wouldn’t be living the same life without him.” 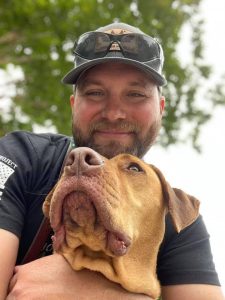 Tango was overlooked for months at the local shelter.

Tango’s story is one of second chances, of hidden potential and of the transformative bond between humans and their service dogs. It is also a reminder of the more than 3 million dogs that enter shelters every single year in America, many who never make it out. Tango’s story also illustrates the vital role animal welfare groups play in saving and rehoming animals and why they deserve our support.

Our organization made the decision from the start that we would not purchase animals from breeders. Instead, we would take on owner surrenders, donated dogs and, when possible, shelter animals. We would happily pay adoption and rehoming fees.

Fees are essential to the survival of these organizations, even as they don’t even begin to cover all the costs associated with an animal while in their care. Adoption fees at the Fredericksburg SPCA for dogs between the ages of six months and seven years is $175 – a bargain for an animal that has received a health check and been neutered, vaccinated, dewormed, fed, housed, and cared for for months. (It’s no wonder that few enter the animal welfare industry to get rich).

Rehoming and adoption fees are also meant to protect an animal from being picked up by just anybody. Paying a fee shows a level of commitment and investment, of ownership and responsibility. While fees don’t guarantee a dog won’t fall into the wrong hands, it certainly reduces the chances. Whether an animal is joining a family as a pet or going into a working dog pipeline, paying fees is the right thing to do, a small way of paying it forward for the next animal that needs care.

Late last summer, I found my own service dog at the Charles County Humane Society in Waldorf, Maryland. Thanks to our relationship with the organization, an employee there recognized the potential of a malinois named Ra and contacted us.

Ra’s previous owner was forced to surrender him due to health reasons but had done a wonderful job raising a stable and temperamentally healthy animal. More than six months into his training, Ra is thriving.

People are sometimes in circumstances where they have to give up an animal, and this can be a blessing for an organization like ours – as long as everyone is honest and transparent. That means being truthful about the dog’s history and not inflating its talent and behavior. Just like all of us, a dog deserves to be set up for success.

Not every surrendered dog is cut out to be a service dog or even a working canine. Some of the dogs that have entered our program go on to be family pets. And that’s OK. Between health, temperament, finding the right breed and all the issues that come with negligence and abuse, many animals cannot be rehabilitated. In all fairness to the animal, some dogs are never going to be cut out to go in public. They will be too overwhelmed.

But some are, and those are the dogs we look for. Channeling that passion allows dogs to be happy in their careers – and there is arguably no better job than that of a service dog. They enjoy the same quality of life as their handlers because they’re always with them.

That was the case with Nikki, a German shepherd whose owner made the heartbreaking decision to give her up. Like Tango and Ra, Nikki checked all the boxes for service dog candidacy, and in 2019 she was paired with Cedric, an Army veteran who endured nine IED attacks during a 14-month-long combat deployment to Iraq. 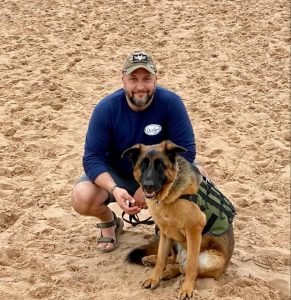 Nikki’s owner was forced to surrender her due to health reasons.

Before meeting Nikki, “I got the impression that I was never going to cure my PTSD. This was as good as it was going to get. I was going to have big trigger events,” Cedric said. “I still can’t tell you how she does it, but because of Nikki, I’m able to be there for my family. I can go to a restaurant and sit there and enjoy what’s going on. Loud noises don’t bother me. I’m not on edge the whole time. PTSD is not a thing that controls my life anymore.”

Nikki has made Cedric’s life more fulfilling. That’s the end goal. That’s what our veterans deserve. That’s the gift that Nikki’s original owner provided when he could no longer care for her.

That’s the gift animal welfare organizations like the SPCA of Fredericksburg and the Charles County Humane Society give us.

Adoption fees are such a small price to pay.

Danique Masingill is president and co-founder of Leashes of Valor, a national nonprofit that provides service dogs at no cost to wounded and disabled post-9/11 veterans.

How I learned to live without the dog that saved my life
Not every veteran should have a service dog. Here’s why.
When seizures sidelined a service dog, she found an even higher purpose
Back to top