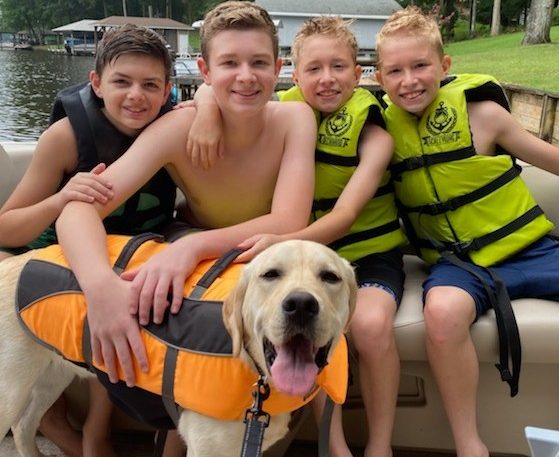 “My grandfather was an Army ranger captured while fighting in Africa in World War II. He spent time in Germany as a prisoner of war before he escaped and fought in Italy. After the war, he used his GI Bill to go to the University of Georgia and veterinary school. He helped raise my brother and me, so we heard stories all the time. We had tons of animals around the house. My father-in-law was a chief warrant officer who did two tours of duty in Vietnam. Coming home was very different for him compared to my grandfather. I think about how service dogs could have made a difference in the lives of Vietnam Veterans.

“We started fostering for LOV last summer. We thought it would be a great opportunity to help and serve others. What we didn’t anticipate was how much it helped us. Our first dog was Nimitz. He was such a wonderful dog and gave us a much-needed change of pace during COVID when my four boys were stuck at home and everything was changing. As much as we know Nimitz is going to help his Warrior, he helped us.

“Even though we get really close to the dogs and love on them, and it’s hard letting them go, it’s not impossible. I just showed my son a picture of Nimitz getting introduced to his Warrior. It’s like sending your kids off to college. It’s sad that you’re not going to see them. But it’s happy because you did your job.”