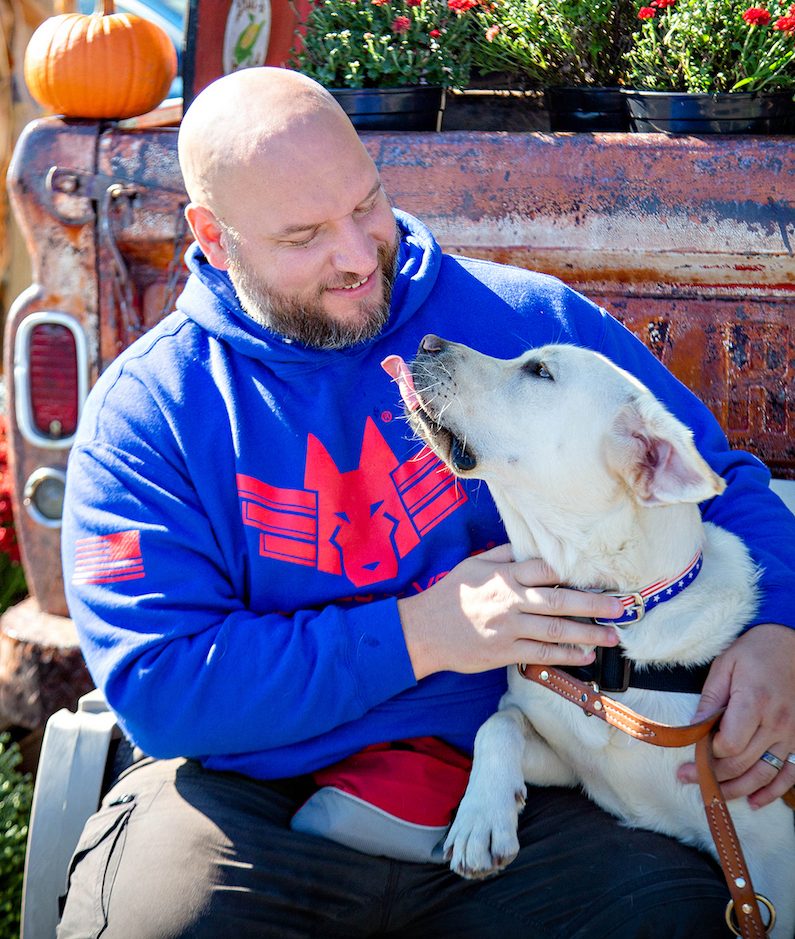 'I want to be a better version of myself"

Aaron is an Air Force Veteran who deployed seven times to Iraq and Afghanistan between 2004 and 2008. After serving in the military, Aaron found his passion as an educator, and today he teaches middle school math and science. Aaron is the first teacher in his school district to have a service animal. With Gordy by his side, he hopes to be a better version of himself — and an advocate and role model for his community and his students.

“I joined the Air Force in August 1999. I was at the Pentagon working as a general’s aid and tour guide on Sept. 11. I got a concussion from the blast impact that slammed me up against a wall. It was an hour later before I realized something had happened. We were all outside and I heard conversation and chatter that a plane flew into the Navy side of the building. After that, my time in DC was done.

“I ended up becoming a chaplain assistant. I wanted something that would make me deployable. I served seven combat deployments in Iraq and Afghanistan. We went out with the Army and the Air Force. During one patrol through Fallujah, our caravan came under small arms fire. A bullet lodged in the window. People started gathering around us and a vehicle exploded. That’s one thing that plagues me now.

“I heard gunshots in the background so often and bullets whizzing over me that I became desensitized to it. I was over-exposed to it. At the time, it didn’t bother me. I didn’t think I had PTSD at all. It never bothered me when it happened but later I started having bad dreams and nightmares. I went to a therapist who explained that the majority of people with PTSD aren’t plagued right away. PTSD is when your brain has processed something that happens but it doesn’t know how to let it go. It was a moment of self-actualization. I really do have this.

“I had social anxiety which turned into mild agoraphobia and hypervigilance. I would love to go into a store and grab groceries or buy a new shirt. But there’s never enough exits. There’s never any type of control for that environment. It overwhelms you.

“A therapist recommended looking into a service dog. Then I met Richard, an LOV Warrior with similar issues. If not for Richard, I wouldn’t have pursued it. I really owe everything to him. When I got here and met Gordy, everything was moving fast. You think, ‘You’re not ready for this.’ But that’s what you’re here for. Having someone like Gordy who is trained to look for certain things without me ever knowing it has been 100% invaluable. After a few days of training, that team concept really clicked. We’re one unit moving together.”