"I don’t think people understand how life changing it is"

“My grandfather was a World War II Veteran. He always told me, ‘If you don’t want to go to college, join the Navy. They’ll feed you three meals a day, put clothes on your back, provide a place to sleep and teach you a trade that will take you far in life.’ I took his advice. I joined the Navy on Sept. 5, 2000. It was great. The military was like family.

“I was going to do four years and go to college. Then 9/11 happened. I’m from New York City. I was born in Queens. When I watched those towers come down, I got livid. When we were able to get computers and satellite phones back, I called my parents. My dad asked if I was OK. I said, ‘We’re completely fine. But I’m staying in the military as long as they’ll let me.

“I went through one of the very last law enforcement academies in the U.S. Navy in 2005. That was huge. I did two ship deployments in my first four years. I deployed to the Middle East on the ground. After that I picked up orders to a naval air facility in a remote corner of Japan. I was the operations supervisor when the earthquake hit in 2011. We were 65 miles north of the epicenter.

“Japan has earthquakes all the time, so you can have microquakes. You’ll be sitting in your office and you’ll feel the ground move. But this one — we were watching concrete move like water. Buildings were moving back and forth. People were falling out of balconies.

“Afterward, the whole island of Japan was dark. The only lights you see are from flashlights or emergency vehicles. It threw us back into the Dark Ages. I helped kick off and build up the emergency operations center, which turned into a humanitarian support base. Planes were coming in every three hours with search and rescue teams. It was one of the most incredible things to watch countries come together and nobody worried about what flag you flew. It was no questions asked. People would sleep on the tarmac just to help these people.

“As far back as I can think back, that’s when the need for a service dog really started. It kind of compounded my three prior deployments. My brain wasn’t processing stuff. I was holding stuff in. The earthquake was a big trigger.

“My next tour was supposed to be super-easy. But halfway through, that’s what I call the moment where I snapped. It got to the point where I was waking from nightmares so drenched in sweat you thought somebody had poured a bucket of water on you. Your brain is reliving these moments over and over and you can’t shut it off. I attempted suicide.

“I knew I needed help. I checked myself into a 21-day inpatient facility. It was the best decision I ever made. I retired in 2015 after 15 years and 21 days. I found every single excuse to never leave the house. Something as simple as putting gas in the car gave me a full-on anxiety attack. I couldn’t go grocery shopping. I made excuses not to go to doctor’s appointments. It was affecting my health. I’d wake up sleep walking, yelling out commands in the kitchen. 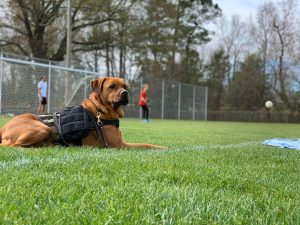 “I’ve been with Whiskey since December 2019. When I first met my service dog, I was super nervous. I was scared to let her down, not as a her handler but as her human. That very first day, I really saw how important she was for me to have a normal life again. My first night at Leashes of Valor, I was having an anxiety attack. Whiskey jumped on the bed. I just started crying, ‘God, this has to work.’

“Whiskey is the best thing in the world. She goes with me everywhere. She’s like a limb at this point. I was coping with medicine — 21 pills a day. Now I’m down to four. Two of those are for allergies. I even coach my kids’ soccer teams. Whiskey is on the sidelines with me. I recently landed my dream job. I don’t think people understand how life changing it is. I was even skeptical about it. I wish Leashes could give a service dog to every Veteran who needs one.”