When seizures sidelined a service dog, she found an even higher purpose

Some dogs are born to heal. We knew soon after meeting Victory that she was one of them. At just a few months old, the doe-eyed Labrador already showed qualities we look for in a service dog. She was gentle and smart and perceptive, and these traits only sharpened under the care of her foster families and canine trainers.

Finally, after more than a year and a half of training, Victory was ready to join one of the thousands of military Veterans who experience post-traumatic stress and other forms of “invisible” traumas in any given year. Like all the service dogs in our program, she would be provided at no cost to a wounded or disabled post-9/11 Veteran.

Those plans were suddenly derailed when Victory began experiencing head tremors and was diagnosed with seizures. Despite the hundreds of hours of love and care poured into Victory, we had no choice but to pull her from our service dog program.

In the service dog industry, “washouts” are a reality we account for: Not every dog that enters the program succeeds. But Victory’s loss was especially emotional. Except for her diagnosis, she met the criteria in every way.

Victory liked to work. She deserved a purpose. She’d spent her life preparing for one. Best case scenario, we thought, we could find Victory a role as a facility dog. Somewhere she could have a life that was full and fulfilling and live up to her name.

Victory would find it nearly two hundred miles away, in the city of York, Pennsylvania, where the police department was looking for a dog to join their ranks for the first time in half a century.

Michael Muldrow is a second generation police officer who in October 2020 was named York’s police commissioner. For as far back as Muldrow could remember, the subject of canines within the department was off limits.  In the 1960s, York’s canine officers would go into Black neighborhoods and use police dogs to intimidate, control and terrorize residents there. 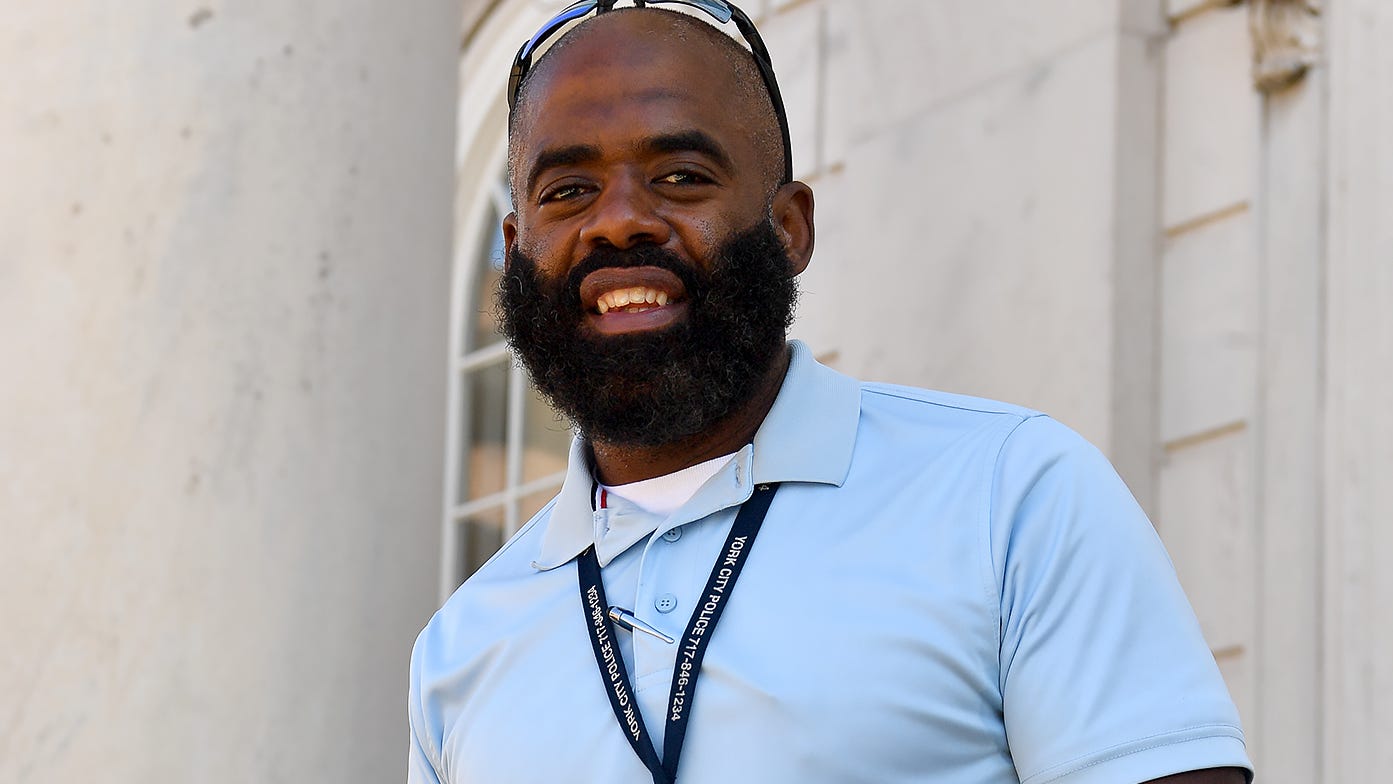 York City Police Commissioner Michael Muldrow believed the time was right for a K9, one that would help heal.

Decades had passed since then, and now Muldrow envisioned a different role for canines — one of comfort and goodwill rather than control. What if dogs could actually help bridge the relationship between the department and the citizens it served? Muldrow wondered.

Word traveled. Within days of pulling Victory from our service dog training roster, we were on the phone with the York City Police Department, thanks to a connection from our friends at Throwaway Dog Project, an organization that repurposes, trains and relocates dogs to help positively impact communities. Throwaway Dogs had helped us find new homes for service dog wash outs before: They’d gone on to serve as drug and explosive detection dogs.

At the York City Police Department, Victory would be paired with Officer Michael Reinert, a Marine Corps Veteran who has spent much of his career involved in mental health. Along with the roles of homeless and mental health outreach officer, Reinert would add K-9 therapy dog handler to his title. As for Victory’s seizure diagnosis, Reinert and the department were OK with that.

Victory’s job had always been to heal. She’d even spent time in a special needs classroom, where she just seemed to know what child needed her most. Instead of healing a Veteran, Victory was on her way to help heal an entire community.

Being a K-9 handler is a big responsibility. There are no days off. The canine goes to work with you and goes home with you. And once you commit, your path is set for at least the next five years. But Reinert was ready for all of it.

So was Victory. The perceptive puppy had grown into an even more perceptive dog, and it was Reinert she went to when we arrived at the police department on a day in early May. “It went like a script,” Reinert said. “We bonded so quickly. The two days of training went flawlessly. In my mind, it was meant to be.”

If anyone had any lingering doubts as to bringing a dog into the department, Victory quickly erased them. “When I go out and walk in town, I make it 10 feet before the first person stops and wants to talk to me. As a police officer, you want a positive interaction. Victory facilitates that,” Reinert said.

People may not remember his name, but they remember Victory’s, said Reinert, and he’s OK with that. 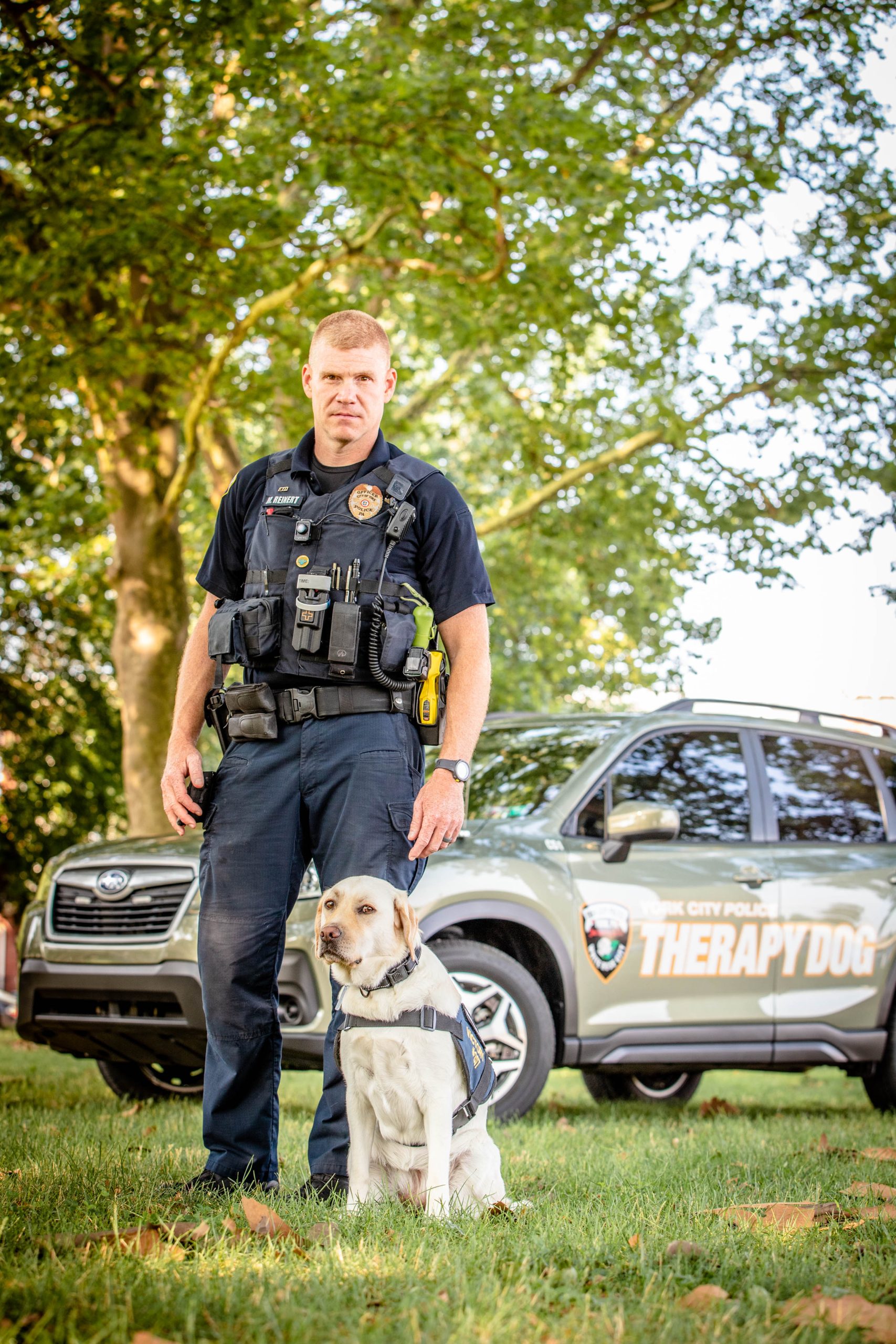 Officer Mike Reinert has spent much of his career in mental health.

“There are a lot of instances where I encounter people on the street that are just having a rough time,” he said. “I can’t count the number of times someone has said to me, ‘this has just made my day better.’ And it’s all walks of life. From young to old, male or female, people you would never even imagine approaching a dog. When she looks at you, it just makes you feel good. You look into her eyes, and you can just tell she’s a caring, loving dog. She feels when someone is not feeling good. She senses it. I’ve seen it probably a hundred times at this point.”

That goes for those within the York City Police Department, too, where Police Commissioner Muldrow  has recognized the need for mental wellness among officers, Lentz said. First responders are not unlike combat Veterans who are exposed to traumatic events frequently or for long periods of time. And like Veterans and active-duty service members, first responders also die by suicide at a greater rate than the rest of the population.

“Trauma is a cumulative thing,” Lentz said. “Although we feel like we can handle it, it pays to try to address these kinds of things as they’re happening as opposed to when someone can’t handle it anymore. We’re recognizing mental wellness as a necessity.”

Victory is a part of that. Recently, she jumped unprompted onto the lap of a person who really needed her in that moment, laying her head on them, Reinert said. She helps in more subtle ways, too, just by being there.

“I went into the recording room recently where officers do their reports. Victory knows a lot of people. She goes over to every single person every single time,” Reinert said. “It has an effect. And it’s going to continue to have an effect.”

A new service dog at the office? It’s everybody’s job to make it work.
Hidden wounds take longest to heal: Remembering Brad Pierce
Want to enjoy the freedoms our military fought for? Help those who serve at home.
Back to top