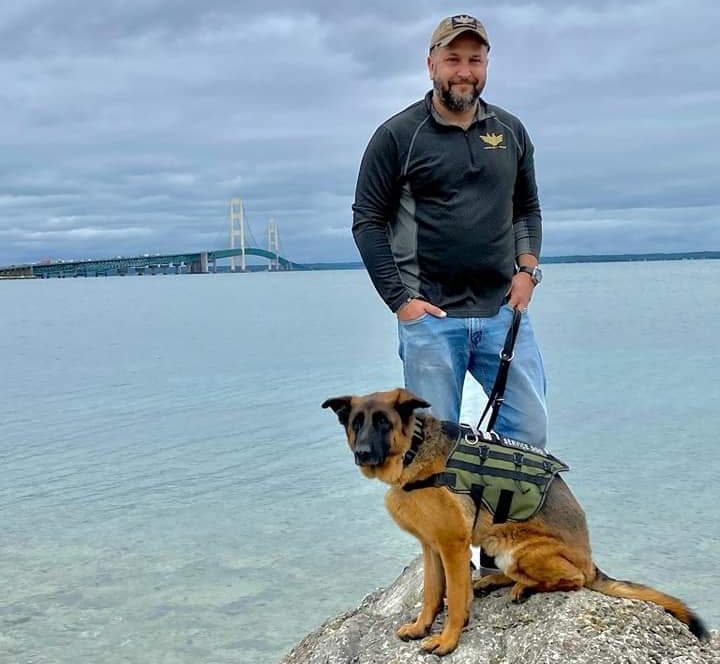 "I'm able to be there for my family"

“I went into the Army right after high school in ‘98. Military service is kind of a family tradition and something I always wanted to do. The Sept. 11 terrorist attacks split my career in half. Post-9/11 was a lot of deployment time. I was a psychological operations tactical team leader and took part in the initial invasion of Iraq in 2003. In the 14 months we were in country, my team went through nine separate IED attacks. There was plenty of action and near misses.

“At the time I was discharged from the Army in 2004, you were basically turned loose and told good luck. Early on, I knew something wasn’t right. I was having a lot of flashbacks and anger responses. I reached out to the VA, but none of the infrastructure that could help me was set up at the time. I refer to the fall of 2004 to 2007 as my ‘forgotten years.’ It was a bad time for me. I was working, trying to hold down a job and support a family. I was self-medicating and drinking a lot. I wasn’t taking care of myself. My family and family relationships suffered.

“Finally in 2008, I was scheduled for a compensation hearing. I got an almost immediate service-connected rating for PTSD. I started doing intensive outpatient therapy, vocational rehab, just trying to get my life together. I got through school and went into the workforce. I was coping, but not well.

“I went back to school for a degree in nursing. When I finished in 2016, my symptoms started coming back. I thought it was pretty well controlled, and I couldn’t figure out why. But I learned it was because now I had time on my hands. Before, I was going to school, working 60 hours a week, raising a family. Now I had a lot of time to myself. Stuff started bubbling back up. My VA counselor said she sees this all the time. Vietnam Veterans may work in a factory for 30 years, then they retire, and it pops back up. It’s normal.

“I went through another round of intensive outpatient therapy. That really got me over the hump. But I got the impression that I was never going to cure my PTSD. This was as good as it was going to get. I had tools to manage it but it was always going to be an issue to hinder me. I was going to have big trigger events. I wasn’t there for my family. I was too busy trying to take care of me to be there for them. I was having night terrors almost every night. I was pretty angry, hyper-vigilant. I didn’t have the best personal and professional relationships.

“I learned about Leashes of Valor on a national radio program. It was Memorial Day weekend. I had thought about getting a service dog before. I’d actually applied through another organization and was accepted but got a lot of push-back from my employer. I didn’t know enough about it, so I withdrew. I sent an email and heard back from LOV co-founder and Retired Marine Capt. Jason Haag within a day. I put my application in.

“I got my service dog, Nikki, in December 2019. I still can’t tell you how she does it, but because of Nikki, I’m able to be there for my family. I can go to a restaurant and sit there and enjoy what’s going on. Loud noises don’t bother me. I’m not on edge the whole time. Before Nikki, sometimes I wouldn’t even leave the house. I almost tore out a whole shelf at Kroger one day because a balloon exploded. I was sitting there on the floor, crying my eyes out, calling my wife to help me get out to the car. I got stuck on things. I’d buy seven things because I couldn’t make a decision.

“Nikki loves to work. She loves to go and do. She’s this fun-loving dog but when you put the vest on, she’s all business. She’s there for me. Because of her, I can be in the moment. I can relax. Having Nikki is empowering. There was a brief moment when I thought, ‘I’ve kept all of this in check and now I have to tell everyone what’s going on.’ But now I run into other Veterans and they come up to me and ask how they can get help, too. I tell them about the program. That’s been very rewarding for me.

“The community Leashes of Valor has built makes you feel not so alone. You rebuild that camaraderie. This is a group of people who can understand you because they’ve lived it. Being able to lift each other up if one of us has a bad day—that’s huge. PTSD is not a thing that controls my life anymore. It’s a thing that may pop up from time to time. It used to run my life. It’s something I have but it doesn’t define me. Helping other people get to that place too is one of the best benefits.”