Want to enjoy the freedoms our military fought for? Help those who serve at home.

In the beginning, there were the first responders.

Before the U.S. bombing campaign against the Taliban, before American troops put boots on the ground in Afghanistan, they were there, racing toward mammoth buildings besieged by burning jet fuel.

We watched them, gear slung over the backs of their turnout coats as they made their way toward an incomprehensible horror. Later, we saw them picking through the skeletal remains of the World Trade Center. We saw their battle-weary faces sullied by smoke and ash and pulverized concrete, by the trauma of it all. On Sept. 11, 2001, war had come home, and emergency responders were on the frontlines of it.

That day inspired tens of thousands of people to join the military. I was one of them, stirred by the sight of police officers guarding places of worship and other vulnerable sites in the Florida city I lived at the time. Over the next two decades, more than a million U.S. troops deployed to Afghanistan and Iraq, and as many as one in five now live with post-traumatic stress disorder.

As a nation, we have done a decent – albeit imperfect – job of addressing this mental health care crisis. We collectively pause on Memorial Day and Veterans Day to remember their sacrifices.

More than 80 percent of first responders say they have experienced a traumatic event. These invisible injuries can happen weekly or daily, leading to cumulative PTSD – a particularly cruel form of the disorder because it builds up over time, making symptoms harder to recognize.

We are in the midst of a national crisis, yet we aren’t talking about it at a national level.

Most people on deployment have the privilege of coming home. They leave enemy territory and they return to relative safety. Frontline workers – law enforcement officers, firefighters, EMS and other public safety workers – can’t. They live where they fight. They may pass the scene of six traumatic events on the way home to their families.

Since founding a nonprofit five years ago with two other veterans to provide service dogs at no cost to post-9/11 veterans with PTSD and other “invisible injuries,” we have helped dozens of former military members and their families become whole again. But it’s not enough. If we want to continue to enjoy the freedoms our military fought for overseas, it’s in our best interest to help those who serve and protect here at home.

While we continue our vital work serving military veterans, we expanded our mission this year to make sure the heroes within our communities also have access to the healing power of canines. In many cases, they are one in the same: an estimated 19% of police officers are U.S. military veterans.

LOV Blue matches highly-trained facility and service dogs with emergency responders and other frontline workers, such as nurses, to provide emotional, mental and physical comfort. These canines can serve so many purposes, from crime victim support to crisis intention and response. 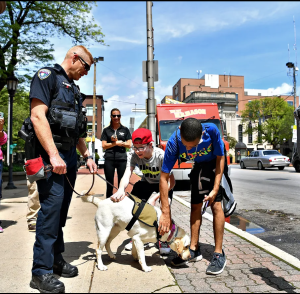 Therapy dogs Victory and Bennie help bridge the gap between the police department and the community.

At the York City Police Department in Pennsylvania, where we have placed two therapy dogs, these canines are bridging the gap between the department and the community. Fifty years ago, police K9s were used to terrorize Black residents. Now they’re a symbol of goodwill. But they’re also playing a vital role within the department.

As Lt. Daniel Lentz, the department’s chief of staff, put it: “We wanted to help heal the wounds of the past, and we wanted to help our officers, too. We’re recognizing mental wellness as a necessity.” First responders often feel like they can handle the daily traumas of their work, he said. The goal is to address it before it’s too late.

York City Police Department Sgt. John Huncher was a Navy corpsman who served in both Iraq and Afghanistan before he became a law enforcement officer. By 2018, he’d quietly endured a decade of the nearly daily traumas of police work that included an officer-involved shooting and the death of a friend and fellow officer during a training exercise. A friend he’d serve with had died by suicide. 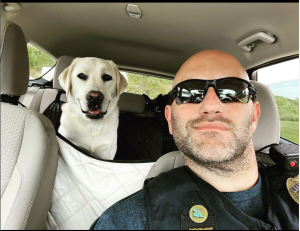 It was all too much, Huncher said, and he found himself sobbing in a chair at home, unable to cope. At the urging of his wife, “I finally sucked it up, talked to somebody and got medicated.” Today, his partner is a therapy dog named Bennie who alerts him when he is about to have a panic attack.

“I want to change the stigma around mental health,” Huncher said. “When I was hitting that bottom, I never talked about it. It’s OK to not be OK. You’ve got to say something. You can’t do it in silence.”